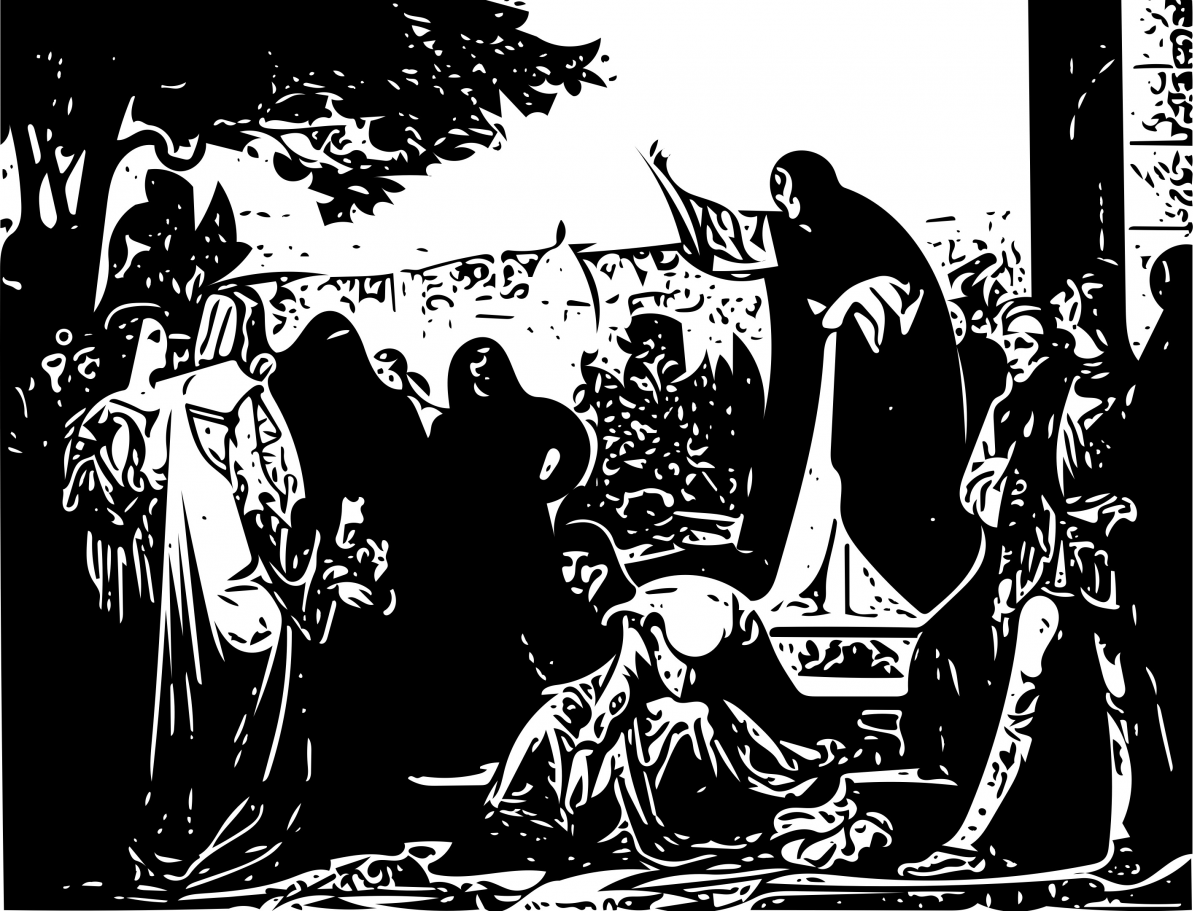 Google doesn’t seem to have expiated its sins as Berlaymont’s crusade is about to become a Seven Years’ War. This week, we have witnessed with weary amazement Mountain View’s questing beast being struck by two new charge sheets: a supplementary statement of objections that persists restlessly in the unpalatable self-preferencing theory of harm and a brand new accusation of limiting third-party websites’ ability to display advertisements from rival online advertising intermediaries. Thus, a third limb has now been added to Vestager’s admonition barely three months after the tech colossus was made aware of her concerns over Android (see ‘Do androids dream of exclusivity?’).

As concerns the supplementary charge sheet targeting Google Search (since the self‑preferencing story is discussed in depth in ‘Alternativlos!’), I’ll just devote a few lines here to pinpointing the not-so-veiled emphasis placed by the Commission’s press release on market definition. Suspiciously enough, after pointedly warning of evidence against Google’s argument that comparison shopping services and merchant platforms (i.e. transactional platforms such as eBay and Amazon Marketplace) compete on the same market, the EU watchdog asserted that even if that was the case it wouldn’t gainsay the tech giant’s dominant position in that hypothetical market. This smacks of a more important role to be played by market definition than admitted by Brussels.

Under the paradigm of dynamic competition and contestable markets that I advocate for in the other posts about Google wars (see ‘Alternativlos!’ or ‘Do androids dream of exclusivity?’), also market definition should focus on indirect network effects, at least when it comes to multi-sided platforms. This means separate markets on each side of the platform since each group of users’ demand (e.g. consumers’, advertisers’ and publishers’) is interrelated but independent and, thus, supply and demand substitution must be assessed separately within each group.[1] This understanding seems to underlay the Commission’s merger practice, which differentiates markets for social network services,[2] consumer communications services,[3] or internet search[4] (the latter cautiously left open), on the consumer side; and online advertising,[5] online advertising intermediation (discussed in depth below),[6] or online display ad serving technology,[7] on the advertiser flank.

No wonder, complex and uncharted online market definition joins an imaginative theory of harm on the frontlines of the Google Search case. What is clear is that the Commission’s refinement of the vague reference to ‘markets for general internet search services in the European Economic Area’ in the 2015 press release[8] (drawing from the even more abstract ‘web search’ market[9]) into a market for comparison shopping services should concentrate on substitution on the consumer side of the platform.

From the supply viewpoint, assuming that merchant platforms are able to offer a price comparison functionality, the gist of the question is whether consumers value the possibility of completing the purchase on the same website as much as to view transactional platforms (online marketplaces like Amazon Marketplace or eBay) and awareness platforms (offering mere price comparison) as non‑interchangeable. At first sight, this dichotomy becomes more and more dim as some marketplaces’ popularity increases and re-directing to online shops is faster. Personally, if I needed a new computer I wouldn’t click on Google Shopping (which I have never done), but I’d probably free-ride on Amazon and then consider going to a brick-and-mortar shop.

Being conscious that the Google Shopping self-preferencing theory is difficult to swallow, the Commission has devised a second argument that translates the exclusivity concerns over Android into the search dimension. Not surprisingly, exclusivity is one of the abuse types which the ‘per se’ test is most deeply engrained in (inconsistently with its Article 101 single-branding sibling). This second charge takes issue with the dominant position of Google’s ‘AdSense for Search’ service in the ‘separate market for intermediation in online advertising’ (as defined in Google/DoubleClick and Microsoft/Yahoo! merger decisions), different from direct sales of web space by publishers. On these occasions, the EU watchdog found that it is common practice for certain online platforms to pool advertisers’ demand for web space and to acquire web space through syndication agreements with publishers (usually small ones without a direct channel).[10]

Google/DoubleClick gives a useful insight into intermediation in online advertising services, which are rendered by ad networks (two-sided platforms aggregating web space stock to be resold to advertisers, thereby providing them with a ‘single buying point’, and usually allowing them to handle and monitor online advertising campaigns), ad exchanges (marketplaces where web space is not purchased, aggregated and resold by the platform but sold by publishers and bought by advertisers on a real-time basis) and media agencies (purchasing web space from publishers or intermediaries on behalf of their advertising clients and planning their campaigns).[11] Problematic Google AdSense operates as an ad network.

A further distinction is to be made between intermediation in search and non-search online advertising (depending on whether or not the intermediated ads are displayed on result pages in response to search engine queries and targeted to match keywords). Although, from the supply standpoint, search intermediaries need to own or outsource search tools and since advertisers seem to view search and non-search ads as substitutable, the Commission didn’t dare to go so far as defining a separate market for search intermediation when it comes to merger control. However, Vestager seems to be now turning the tide in relation to Article 102 by stating that ‘AdSense for Search’ has a market share above 80% ‘in the market for search intermediation in the EEA’.[12]

But how does ‘AdSense for Search’ work in practice? As an ad network platform, it pools the supply of web space by entering into contracts with third-party websites (allowing Google to add lines of code so that ads can be targeted with the third party’s internal search results) and then resells the web space to advertisers on a pay-per-click basis. Thus, when a query is entered in the third-party internal browser, ads that match certain keywords are displayed along with search results and, when the ad is clicked on, the advertiser pays and Google and the publisher share the revenue. ‘AdSense for Search’-intermediated ads are displayed either through AdSense’s customisable search engine that publishers built in their websites (Custom Search Engine) or by linking them to the results retrieved by the publisher’s internal search engine by means of the AdSense Custom Search Ads application (which requires the publisher to meet certain requirements set by Google).

In this scenario, Silicon Valley’s jabberwocky has been charged with a ten-year behaviour consisting of including exclusivity clauses in its contracts with the largest publishers (preventing them from sourcing ads from other providers), which were progressively replaced by the imposition of hardly more subtle minimum volume commitments and premium placement of AdSense-intermediated ads on publishers’ search results pages, along with the requirement for Google’s approval on the publisher’s display of ads intermediated by competitors.

As explained in previous posts on Google’s crusade, the cornerstone of market power and abuse analysis under the paradigm of dynamic competition and contestability is the concept of network effects. As a matter of fact, network effects can afford an incumbent market power by generating economies of scale (since additional users represent negligible marginal costs, but they increase the platform’s utility by allowing to improve search results, social interactions or purchase suggestions), thereby allowing it to entrench itself in a market position. For instance, a social network with many users on the consumer side may attract advertisers willing to pay for the indirect network effects involuntarily generated by the former, as well as more consumers seeking interaction with current members (i.e. direct network effects).

However, network effects can also give rise to pro-competitive effects by facilitating the expansion of new entrants coming up with a valued (or faddy) innovation that reaches a critical mass allowing to reap economies of scale. Therefore, barriers to entry raised by the economies of scale, which cause markets operated by platforms to be naturally concentrated, don’t deny the high contestability brought about by rapid dissemination of innovation.

The adhesion pattern (i.e. users’ choice to subscribe to one – single-homing – or several – multi-homing – platforms for the same purpose) is also to be reckoned with. Multi‑homing can either work as a powerful countervailing factor to market power or create bottlenecks where one side of the platform allows for multi-homing and the other doesn’t. Indeed, platforms having a single-homing side are able to exert market power on users from the multi-homing side wanting to interface with single-homing ones. Moreover, since multi‑homing is more likely the lower the cost of joining the platform and the higher its differentiation, multisided platforms have incentives to lower prices and to differentiate their product (and ultimately to innovate).

Consequently, dogmatic presumptions that have performed quite well during their long lives in the analogue world are absolutely ineffective in digital markets, where things are not black and white, sinful or blessed. Hence, if Brussels’ modern Savonarola were to go too far in his burning of any devices that could tempt tech dominant firms to commit the mortal sin of exclusivity, many future breakthroughs to be come up with, not only by these giants but also by small innovators deprived of their incentives, would be lost forever in the purifying fire.

EU, competition and regulation lawyer with experience in law firms (Uría Menéndez, Slaughter and May) and the CJEU. LLM in EU Law and Economic Analysis from the College of Europe (Bruges), master's degree in European Studies from the University of Seville, bachelor’s degree in law and business from the University of Seville. Currently, Payments Legal Counsel at Amadeus and lecturer at Universidad Carlos III, Instituto Superior de Derecho y Economía and Instituto de Empresa. Board member at the Spanish Association for the Protection of Competition (AEDC) and newsletter editor at the Spanish Association for the Study of European Law (AEDEUR). View all posts by PabloSD